What To Do With A Dead Printer? Sell Your Toner & Ink For Cash! 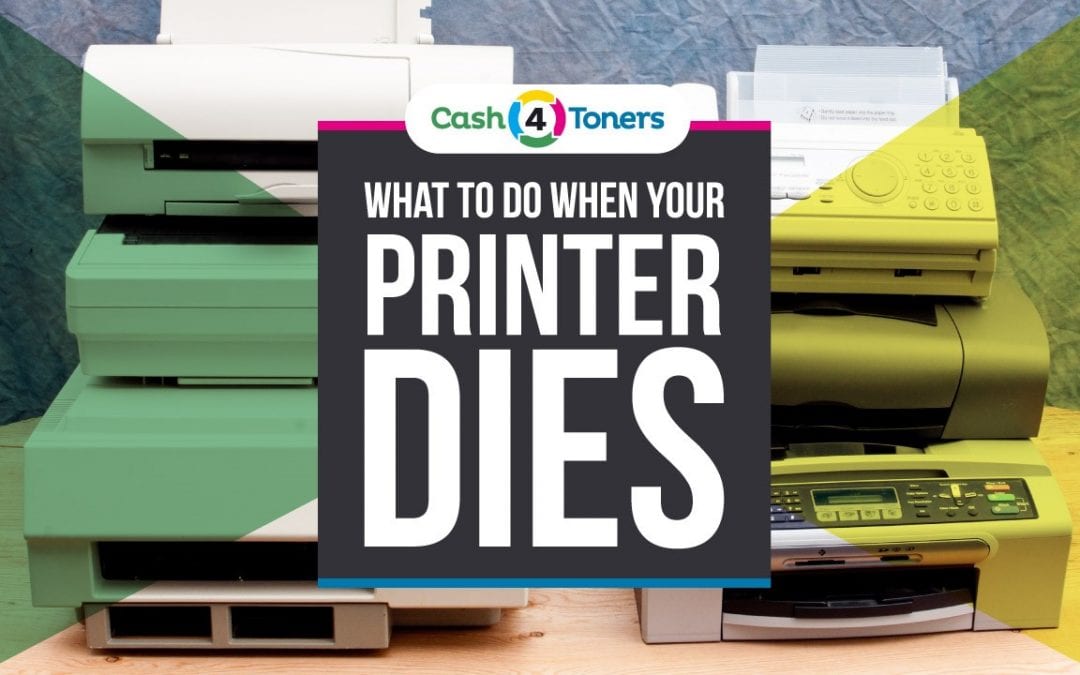 It’s hard to understand, and even harder to talk about, but printers die, often before their time, usually in the middle of a print job. Argh! Noooo!

What do you do with a dead printer?

Dead As A Doornail

The first thing you should do when your printer dies unexpectedly is get rid of your old supplies. Get cash for your toner!

Not only is this an important part of the grieving process, but you can put cash in your pocket by selling those unused, surplus toner cartridges.

Especially ink cartridges! Those things have a pretty short shelf life, so sell them to a buyback company before they’re worthless!

Before you buy a new printer, sell your surplus toner from your old printer.

Accepting the death of your beloved printer is a process not unlike the Kübler-Ross stages of grief.

You’ll bargain with your printer (“Come on, finish printing the page, at least!”), and may experience a bout of depression (“This printer was barely two years old….*sniff*…”).

But eventually you’ll reach a stage of acceptance — your printer’s dead, and it’s not coming back.

It’s time to dispose of physical remains, which is never pretty. What do you do with a dead printer?

We believe you can tell a lot about a society by the way it treats its dead printers, and we choose a more humane and civilized method of disposal.

The most common way of disposing of your old printer is through recycling.

Contact a local facility that specializes in computer peripherals.

They might charge a small fee for the service, but professionals will safely remove any toxic items from the printer, and recycle every possible part.

Your township or municipality may also have a scheduled electronic waste collection pick-up or disposal center . . . check your town website or the notices at city hall.

What To Do With A Dead Printer?

The plastic housing and printed circuits of your dead printer pose a threat to the environment, and most states have strict rules against dumping printers in the trash.

You don’t want your ink and toner cartridges ending up in landfills either.

The environmental impact of improperly disposing of printers is substantial, reports the European Printing Ink Association.

Recycling begins on the home front, and if you work in a business with the same printer model throughout the offices, it might be worth keeping that dead printer around for spare parts.

Give To The Cause

You may also be able to donate your dead printer to charity.

Some facilities collect, repair and donate printers to nonprofit organizations and other institutions.

In return, you get a tax write-off, and your old printer doesn’t end up in a landfill.

Dead printers — like dead computers, scanners, monitors, and other peripherals — must be recycled.

Potentially toxic materials are used in the construction of modern electronics, which pose an environmental threat.

Do the right thing and dispose of your dead printer properly.

Canon Error 5200 – Everything You Need To Know (Causes and Solutions)

Canon offers a range of great printers for both personal and professional use. Most of the time, they operate as expected with excellent results. However, nothing in this world is perfect all the time, and the Canon error 5200 is a common problem across various models, including the PIXMA series. Causes of the Canon Error […]
Feb 23, 2022 Read More

Why is My Printer Toner Not Sticking to the Paper?

Laser printers are great until they stop working right. Then, they are anything BUT great. Say you’ve got a document that is due on your bosses desk in 15 minutes. Or a proposal to be in the mail by end of the day. So you hit ‘print’ only to find ____________. Aarrgghh! Why is the […]
Oct 25, 2018 Read More
Back to all articles