Yelp’s Review Filter — Does It Hurt Your Small Business? 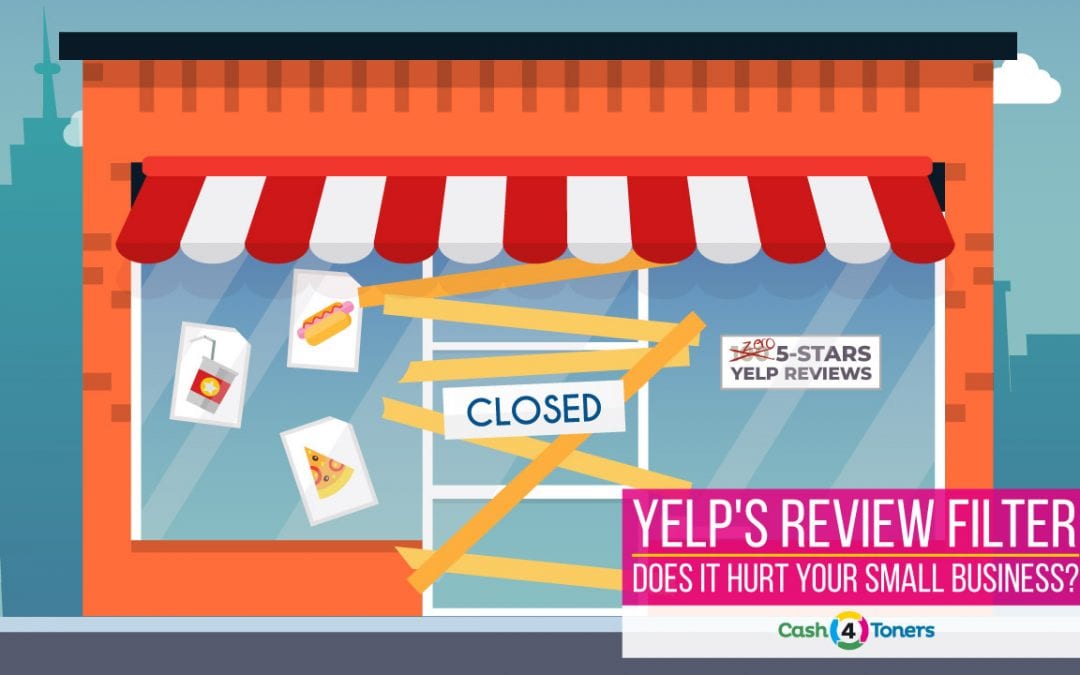 Yelp removes reviews it feels are fake or irrelevant with the help of an automated review filter.

But are small businesses hurt by hidden reviews?

Many Yelp users claim real reviews were unjustly removed, however. Even more troublesome, filtered reviews remain at the top of a user’s Yelp account.

As a result, many users are not even aware their reviews are gone. Even though Yelp has been cleared of wrongdoing in US courts, extortion claims continue to haunt the company.

Filtered reviews end up in Yelp’s “other reviews that are not currently recommended” section. Customers and business owners alike feel the pinch of Yelp’s funky filter.

“The filter is inconsistent and non-transparent,” explains Sam Dirnfield, CEO of Toner Buzz.

“Yelp keeps the details secret, but it doesn’t follow any order. Real customer reviews get removed. This doesn’t happen on other platforms like Facebook or Google.”

For example, California photographer Maxine Evans, found her “not recommended reviews” double from 50 to 100 last autumn.

“It took years of work to get these reviews,” Evans said. “This is my livelihood”.

“Yelp removed every one of my reviews,” Houghtaling reports. “For two years I had the number-one rated business in my industry. Now I rank 45 with zero reviews. There should be a class action lawsuit against Yelp!”

“Your Yelp rating is spread all over the world, regardless of which search engine you use,” Dirnfeld notes.

Did You See A Ghost?

Yelp’s review filter got a major update last October, according to this article from Search Engine Land.

What Is The Yelp Automated Review Filter Thinking?

Mom-and-Pop shops certainly live and die by Yelp ratings. But how are ratings determined? Why does Yelp’s favor some reviews over others?

“Yelp claims the filter is tweaked often. Some days you see positive reviews, some you don’t,” Ashley explains.

“I have seen Yelp’s review filter work as intended. But I have also seen it not work more often than I feel comfortable attributing to chance.”

Around ¾ of submitted reviews get approved, according to Yelp. Software checks for quality, reliability, and user activity. User reviews may be filtered for:

Trasgash points to industry studies to back his claim.

“The algorithm looks at many data points,” Tragash explains. “It is always learning, so it’s possible for reviews to move around. Given the complexity of the software, we can’t say for certain why a specific review gets recommended or not.”

But the best way to handle Yelp is to keep customers happy, according to Tragash,

“At the end of the day, when I speak with business owners about these reviews, my advice is always the same” Targash explains.

“Focus on providing a great product and consumer experience. Let your customers know how much you appreciate the love they’ve shared on Yelp, and encourage them to do the same for other local places they love.”

Printing Statistics: Printing by Numbers in 2022

A look at the latest printing statistics shows how the landscape of professional printing continues to change and evolve. The professional printing market once centered around putting text on paper, in the form of books, magazines, and newspapers. This was the precursor of the Information Superhighway when information was kept with paper and ink. Modern […]
Jan 02, 2022 Read More

Is Your Printer Spying On You?

Is your printer spying on you?  Yes, it is. So is your mobile phone, your car, and your web browser. Machines keep records in their memory banks. Most of the time these records get destroyed when your electronic devices are trashed. However, if you’re ever involved in an investigation, your devices provide clues about how […]
Feb 07, 2020 Read More

School is a drag, but a perky printer can liven up any student workspace! As 2020 fades into the sunset, let’s look ahead to the best printers for students in 2021. Do You Even Need A Printer For School? Many students can probably get away without one. Most colleges and universities have facilities on campus […]
Nov 08, 2019 Read More
Back to all articles